A celebration of literature and the arts, the Hay Festival is also a place where big ideas find an audience and where people find inspiration. This year’s Hay Festival keeps in line with the festival’s tradition, featuring well-known authors as well as neuroscientists, singers, climate change experts and at least one lawyer. Obelisk Support CEO, Dana Denis-Smith has been invited to speak at Hay Festival 2018 as part of a panel on 2018, the year of women.

If you are headed to Hay-on-Wye, here is everything you need to know so you don’t miss this performance.

The festival takes place in a tented village at Hay-on-Wye, on the edge of the beautiful Brecon Beacons National Park and the event will be at the Starlight Stage, right next to the main entrance. The map below shows how everything is laid out. Click on the map to get the full resolution map on Hay Festival’s website. 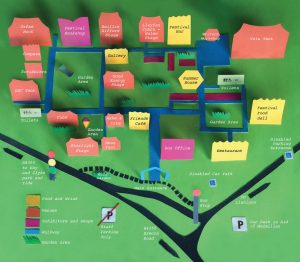 You can find all details on the official Hay Festival website here.

What If You Miss the Event?

Many Hay Festival events are filmed and publicly available on YouTube. We do not have any confirmation at time of publication that it will be the case, but those who cannot attend the event may get lucky and be able to watch the evening on YouTube later. We will update this section when we know more.