One of the best positive contributions of technology to society is freeware and the open source movement. It’s the idea that you can share knowledge without expecting anything in return, just because you can. At the junction of law and technology, legal technology exists to boost corporate profits but also works in parallel for the good of society, improving access to justice for the masses. On 17 October 2018, 2000 lawyers and legal technology enthusiasts gathered in London for the Legal Geek conference 2018. Was it a corporate trade show, or was there more to it?

So we began, and no self-respecting technology conference can unroll without a dose of AI. When Jimmy Vestbirk declared that the Legal Geek conference speakers would be announced on stage by Siri, the iPhone’s virtual assistant, there was a pause in the audience at the Truman Brewery in London. That was before Siri introduced Taylor Wessing senior associate and rower extraordinaire George Biggar, in an impeccable manner, opening the social chapter of the conference.

Lawyers and Society: Discussing Mental Health and Access to Justice

Props should go to Legal Geek for not only partnering with Mind charity, but for shining a bright light on mental health issues via George Biggar. This lawyer rowed across the Atlantic Ocean in January 2018 to raise awareness about mental health in memory of his late mother, a lawyer who suffered from depression.

He shared three tips with the audience.

After George Biggar we heard from Richard Keen, spokesperson for Ministry of Justice business in the House of Lords. Keen pointed out that legal tech meant a lot more than smart contracts and that in the public realm, it could improve access to justice and bring down its costs of its access. Most importantly, he said, we should remind citizens that this won’t be 1984 – despite what newspapers say.

Moving on to the community ground, Christina Blacklaws, president of The Law Society, stressed that as lawyers, we can make a real difference and that technology can bring about a brighter and better future for all of us. How do you go about it, though? The Law Society recently partnered with companies in the tech space so that lawyers from all different walks can work together and launched the Law Tech Delivery Panel, to build a supportive environment for law tech companies. Check it out and use the power of LawTech for good in the world.

Echoing what George Biggar had said, Maaike de Bie, Group General Counsel for Royal Mail hit the nail on the head in the in-house arena. Yes, this was a technology conference but we are all still humans and should behave as such. When was the last time you asked an associate, ‘how’s your day?’, ‘how do you do?’. Asking simple questions is not just showing you care, it’s an effective team engagement tool. Together with her team, Maaike de Bie developed a vision and aligned it with the bigger picture of the company. It was about balance, starting with no emails after 7pm or on weekends unless it was urgent. After a couple of months, the late emails started falling away and with more autonomy, lawyers got the work done in their own way. By being a bit more human at work, she ended up upping her team’s performance too.

This year’s women in law panel was moderated by Lexoo’s Ivy Wong (in stark contrast to the choice of a middle-aged white male last year). Issues such as gender diversity and female entrepreneurship were discussed with Joanna Goodman, journalist, Julia Salasky, FT legal innovator of the year and Caroline Ferguson, legal tech entrepreneur. Joanna Goodman said that to encourage diversity, we should get rid of the ‘bro’ culture, where men have their first meeting at 6pm in the gym (or clay shooting) and women are invited to sit in a spa doing nothing, and meeting nobody.

Next, Julia Salasky mentioned that people are more likely to be influenced and motivated by someone that looks like them and that the legal industry needs female role models that everybody can relate to. Caroline Ferguson closed the panel by discussing her journey searching for investors and challenging gender bias.

The second morning session was opened by Obelisk Support CEO Dana Denis-Smith who reviewed the history of legal technology in sounds (you can view it here on YouTube) and how talk of legal technology has always preceded adoption on the ground. She also stressed that adding technology for the sake of adding a shiny new object to a company’s management tools misses the point of legal technology. Legal tech should answer existing needs and be at the service of humans – not the other way round.

Then, we heard from Integreon’s Alma Asay – who sold her legal tech business Allegory Law (litigation management). She spoke mainly about exit and having the courage to ask for help, to get yourself noticed and most importantly, to make sure you get revenues in.

Kira Systems’ Noah Waisberg talked about not believing the hype we are hearing in legal tech and explained his methodology for spotting ‘ hype.’ For example, when you read a press release, check if there are any customers or revenues, whether there is definition around what the product does and also if a lot of the messages are phrased as an intention in the future as opposed to fact. If so, perhaps it’s more hype than reality. Too much hype and not enough solid delivery and adoption would be detrimental to the credibility of the LegalTech community. Fortunately, risk-averse lawyers are apparently 90% skeptical and take a lot of time to buy into the hype.

Finally, Alejandra Figueiras of The Future Lawyer told us that being a lawyer in reality didn’t quite match the dream. While she found that she loved the subject, lawyers were often seen as ‘monsters’ – unhelpful, expensive, self-interested. Expanding her horizons, she learnt to code and hopes to be able to marry law and tech in her new venture.

Getting Real About Change

The early afternoon session saw the likes of Richard Tromans, Russ Shaw or Catherine Krow on stage. Obelisk Support’s tech team was in the room and took home from the “Getting real about change” the message that we should find the pain points that the legal sector is facing before investing in legal tech. It’s very easy to ‘just buy’ technology and go into a spiral of moving from one platform to another. The best way to figure out what the problems are is by asking the lawyers who face them on a day to day basis, and by focusing on creating platforms with their input as users. It demonstrates the importance of investing in UX research and keeping your users at the centre of your product.

For Richard Collins of the SRA, regulation on a day to day basis is dull and innovation is a lot more exciting (no surprises here). From the SRA’s point of view, one of the biggest problems in our society is that people can not access legal help. True innovation would result in finding new and better ways in delivering services to people who need it. In order to do so, he encouraged lawyers to make themselves more approachable and to talk to the SRA about ideas. The SRA can give out waivers to try things out to see if it’s going to work.

Hella-Franziska Hoffmann, from Thomson Reuters Labs – London, opened with a market status. AI is in demand by law firms to help them stay competitive or to give them the edge but what is truly AI? In the legal industry, the trends around legal AI and how it could be used include legal stats, predicting costs, extracting facts, monitoring trends, implementing chat bots, analysing and generating contracts. 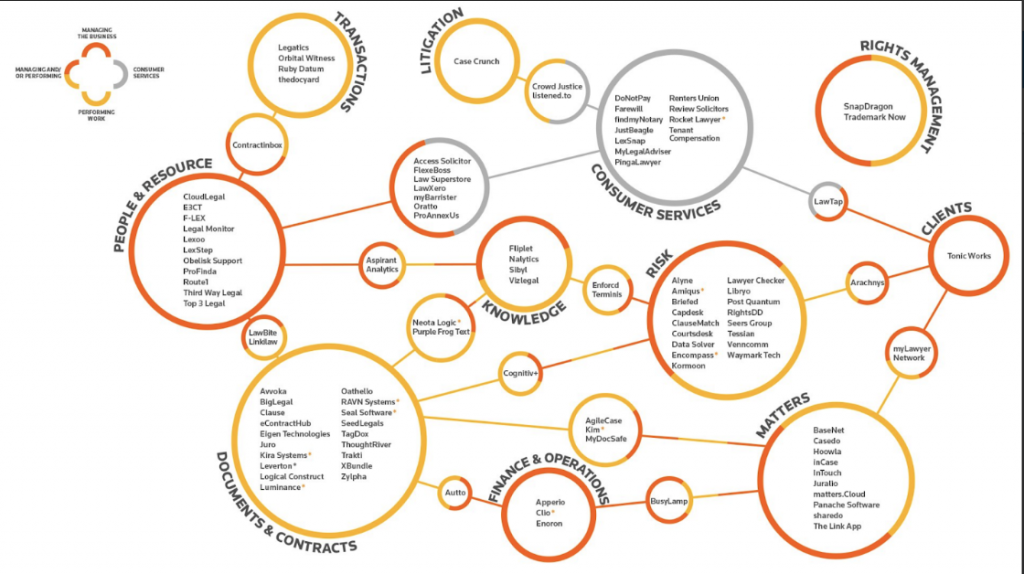 Catherine Krow, Digitory Legal, asked a few questions to the audience: Why adopt legal tech? It’s an opportunity. Why invest? It’s a market differentiator. However when companies buy tech, they face many challenges such as trying different ones until they find the one that works. It’s a time consuming process and the best way to increase adoption is to incentivise lawyers by investing in them. Set clear goals, measure the improvement and if it works, market it and tell the world.

Freshfields presented a startup within a law firm developed by lawyers within the firm. Addressing the UX point we raised earlier, they emphasised how you need to work closely with the users you’re developing the platform for and them as a law firm, this translated into doing workshops with their clients.

After Mike Cappuchi of Foundation Lab, Shmuli Goldberg of LawGeex presented a few hard facts: 92% of legal tech post pilots fail and law firms are bad at buying legal tech. Based on these premises, how do you know that you’re ready for tech? Saying ‘I’m curious about AI’ means that you’re not ready for tech. If on the other hand you think, ‘I need to find a way to do this quicker so I’m not at the office 24/7,’ then you’re ready for tech. Solve the problem first then buy to achieve the results you want.

Denise Nurse of Halebury discussed diversity and change and was followed by one of our favourite sessions on the ‘digital Lego’.

Stuart Barr of High Q explained the concept of digital Lego – by combining multiple platforms, you can create solutions. It helps simplify the concept of how we use tech and where to begin. As is often the case in tech, by using our creativity and imagination, there is no limit to what we can do. Like a Lego brick game, legal technology is an area where you can start small and add on ideas to your solutions or change them to build big but with a caveat. Only the smartest firms will survive. In true Lego fashion, the key to success lies in being adaptable and flexible.

Axiom Law’s Al Giles (Axiom) reinforced the reality-check mood by stating that modernisation should not be mistaken for innovation and that we should focus on the “who” as the how is the easy part. He illustrated his point with two popular retailers – Amazon is an innovator where as John Lewis is a moderniser.

The Obelisk Support team came out of the conference buzzing with ideas, names, quotes and inspiration. Sadly, we were too busy meeting people and attending talks to try out the many LegalTech vendors set up with their laptops. Food for thought: maybe the Legal Geek conference should spread over two days? With so many quality speakers, it’s hard to leave your seat to venture into vendor space, particularly if vendors only display their brand names. As end users, we’d love to see vendors sorted by themes or topics spelled out in clear lettering as this would make navigation more fluid.

At the start of this long post, we asked if the Legal Geek conference 2018 was a trade show or if there was more to it. The short answer is yes, there’s more to it. It’s a lot of thought-provoking ideas and it’s not just about buying tech. In fact, the consensus seems to be that lawyers are very slow adopters of tech but that doesn’t stop legal tech start-ups from growing and experimenting. Much on the contrary.

The hype is there and the conference packs so much energy and experience into a long working day that it’s easy to overdose on information. Judging by the past two years, next year’s Legal Geek conference will be even bigger. The challenge for Jimmy Vestbirk and his team will be to keep the high-five geek spirit alive without too much noise killing the key messages. With the team’s dedication to conversation, collaboration and improvement, we don’t doubt their ability to deliver.