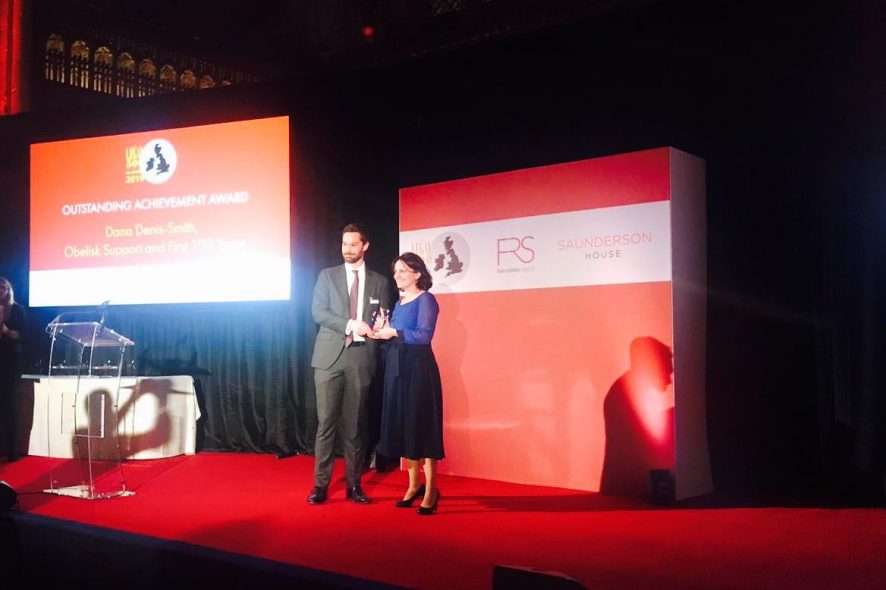 The year 2019 starts on a high note for Obelisk Support CEO and founder of The First 100 Years project, Dana Denis-Smith, after 2018 saw her voted LexisNexis Legal Personality of the Year. On 6 February 2019, she received an Outstanding Achievement in Legal Services prize from the Legal 500. The Legal 500 UK Awards recognise and reward the best in-house and private practice teams and individuals, with over 50,000 interviews conducted to ascertain the winners.

Taking place the same evening as the 20th anniversary reception of LegalWeek by Hyde Park (which we at Obelisk Support also attended), the Legal500 UK Awards in the heart of the City of London was a great gathering of ‘winners’ and got together the key players in the sector – across the profession from in-house to law firms and barristers chambers – for a night of celebration.

Gender Equality in the Legal Profession

At the Legal500 UK Awards 2019 last night, the Legal500 made a public commitment to the promotion of diversity in their rankings and encouraged firms in the room to put forward more women and people from minority backgrounds for consideration.

Legal500 UK Editor, Georgina Stanley, said that if firms do not put forward women and people from minority backgrounds then they “risk being an echo chamber for the status quo”. In an industry where gender balance remains a big issue, all of us legal professionals also serve as role models for future generations of women.

They showed their support for the centenary of women in the legal profession this year by awarding all the Outstanding Achievement Awards to women: Penelope Warne (CMS), Julia Salasky (CrowdJustice), Nilufer von Bismarck (Slaughter and May), Sharon White (Stephenson Harwood), Baroness Shackleton of Belgravia LVO (Payne Hicks Beach), Sandra Wallace (DLA Piper), and Dana Denis-Smith of Obelisk Support and the First 100 Years project.

Interestingly, all the awards for women were given by men. Surely, an area to improve on in the future.

Every member of the audience received a booklet upon arrival listing 2019 winners, booklet which included a feature on the women being recognised for their outstanding achievements in legal services. This is what the feature on Dana Denis-Smith read:

“As the founder and CEO of Obelisk Support and as the founder of the First 100 Years project, Dana Denis-Smith has put her desire to help women succeed in law at the core of her professional life. The former lawyer and journalist founded Obelisk Support in 2010 to help City lawyers – especially mothers –to work flexibly around their family and other commitments, while simultaneously providing businesses with flexible access to lawyers. The company now serves clients including BT and Goldman Sachs. In 2014, she founded the First 100 Years project to chart the history of women in law and celebrate their achievements. 2019 marks 100 years since the Sex Disqualification (Removal) Act 1919 was enacted, allowing women to enter the professions.”

Reflecting on her award, Dana Denis-Smith says, “I was extremely pleased that the Legal500 put the spotlight on women in law and was very honoured to be in the company of some incredible women leaders of the last 25 years.” 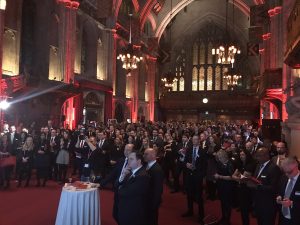 This year’s Legal 500 award took place in the magnificent 14th-century Great Hall of Guildhall in London, a medieval jewel of architecture with stained glass windows. The turnout was fantastic, a lot of smiles and tinkering glasses. The Legal 500 team took the stage expressing how we should promote diversity within our legal teams, especially individuals from BAME backgrounds.

Partner Charity: Save the Children 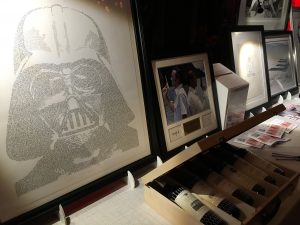 It was a delight to have the Legal500’s partner charity, Save the Children at the awards. The silent auction included a Darth Vader portrait as well as a £400 red wine set (lawyers know their wines), and whoever contributed to the charity could see how their contributions helped the children thanks to a virtual reality stand showcasing real-time contributions. It was truly a heart warming and eye-opening experience.

We were thrilled to see familiar names in the cohort of 2019 winners, including many clients such as Linklaters in Corporate/Commercial, Goldman Sachs in Banking, BT in CSR & Employment, Ocado and ASOS in Retail and O2 Telefonica in Telecoms.
We were also very proud to see names associated with Obelisk Support’s partner charity, The First 100 Years, including Sandie Okoro of the World Bank. 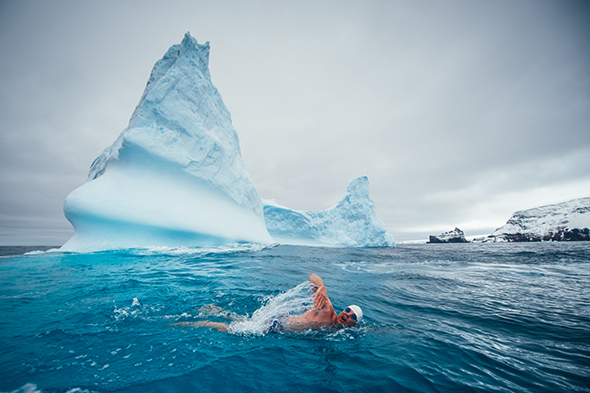 There are countless unsung heroes throughout history that are deserving of greater recognition and appreciation. At Obelisk Support, we strive to shine a light on remarkable lawyers who are positively impacting the world via our legal blog, The Attic.

In 2018, we celebrated lawyers who are changing the world for the better and who are using their skills to give back to the community and to create a positive impact on the planet.

Join us in celebrating the contributions and achievements of other lawyers who share the same positive values and change society and the planet for the better.

Who Deserves to be Recognised?

The list of probono lawyers who are changing the world for the better recognises the achievements and contributions of members of the legal profession who promote accessibility, inclusion and equal rights of others or who are advocates for the planet and who fight climate change.

The 2019 list will feature recipients who demonstrate excellence and leadership in one or more of the following eligibility areas:

How to Nominate Someone

Please take the time to nominate a friend, colleague, client, employee or employer who deserves to be celebrated for their outstanding probono efforts! Consider nominating lawyers whose accomplishments have yet to be publicly acknowledged.

Send an email to [email protected] including

The entries will be reviewed individually and judged on merit by a panel of lawyers, journalists and members of the legal industry.

Finalists will be contacted individually by email and the final list will be published on 31 January 2019. 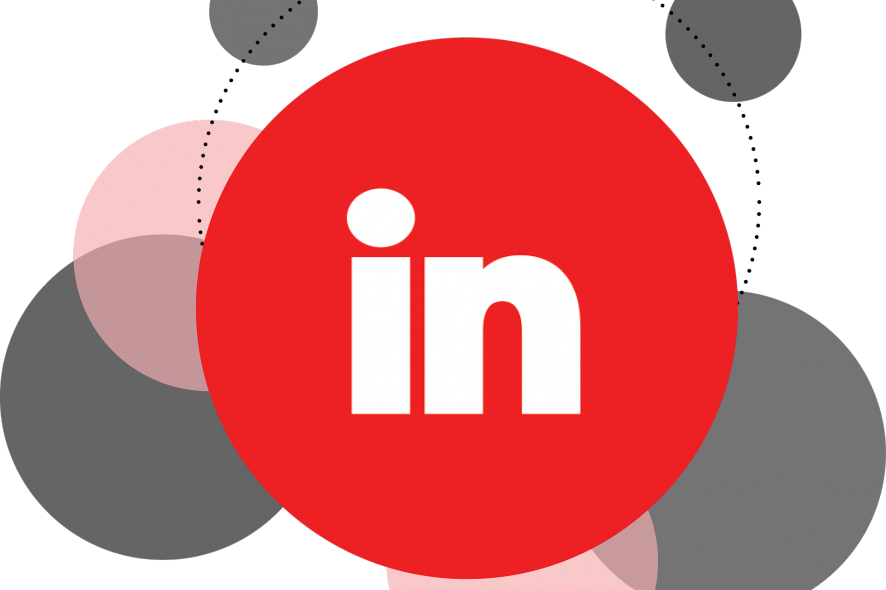 LinkedIn is by far the most popular social network amongst lawyers, so how you can ensure your profile stands out from the crowd and you get the most from your presence on the site?

At Obelisk Support, we encourage our lawyers and non-legal staff to create a great LinkedIn profile that shows who they are and what they do. How you approach LinkedIn will depend on your own personal goals. Whether you want to build your personal brand, stay in closer contact with legal industry peers, or seek out new prospects, the following tips will help you to create a solid and searchable presence as a lawyer on LinkedIn.

LinkedIn isn’t like Twitter, where you can follow and be followed by anyone and everyone and cast your audience net widely and indiscriminately. LinkedIn provides the opportunity to craft a more useful, relevant and supportive online network of contacts, many of which you will have in-real-life contact with.

This is where LinkedIn really goes beyond an online public CV. Publishing, sharing and following others’ content can greatly expand your knowledge base and raise your own profile.

#4. Reach out to your contacts

LinkedIn is a social network, but it’s easy to forget this aspect. Conversations with like-minded individuals, be they online or in person, are always valuable.

LinkedIn is professional, but the most impressive and searchable profiles do well because they also show a well rounded personality. Your profile should be approached as a living and breathing extension of you and where you want to get to in your career – because you never know, it could be the thing that helps you get there.