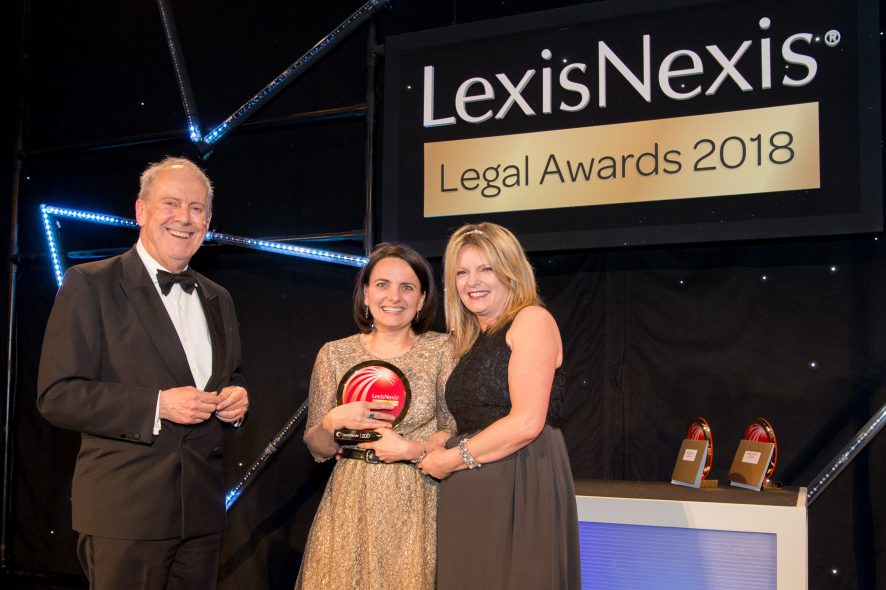 The LexisNexis Legal Awards 2018 were announced on Thursday 15 March 2018 and we are proud to report that Obelisk Support CEO and First 100 Years founder, Dana Denis-Smith, is Legal Personality of the Year 2018.

These prestigious awards – which are in their fifth year – shine a spotlight on the achievements of both individuals and teams across the legal sector, including private practice, in-house counsel, the Bar as well as suppliers. They celebrate the vital contribution the people and organisations that work in and around the law make not only to the future of the legal profession but to the wider community and the advancement of the Law itself.

The Legal Personality of the Year award honours an individual who has made an outstanding contribution in the legal sphere in the past year. Dana was picked through an online vote of the New Law Journal readership from a shortlist compiled by the judging panel, shortlist including Sean Jones QC, Gina Miller, Ryan Mowa and Clive Stafford Smith.

“This means a lot to me” says Dana Denis-Smith, “- because it recognises the years of work I and my team have poured into both Obelisk Support and First 100 Years (2014-2019): Women in Law; because it recognised that at the heart of our work is a very important cause  – the fight for equality. I have so many people to thank for helping me get this far – my team, the clients and consultants that have helped build Obelisk into a sustainable multi-million business; the trustees, professional champions and volunteers at Spark21 and the First 100 Years; my tribe of female founders; and my ever patient husband, John Denis-Smith and my daughter, who have kept me sane and motivated and remind me every day that Equality Starts in the Home.”

Winners of the LexisNexis Legal Awards 2018

Other winners of the 2018 LexisNexis Legal awards are

Congratulations to all the winners for their achievements.