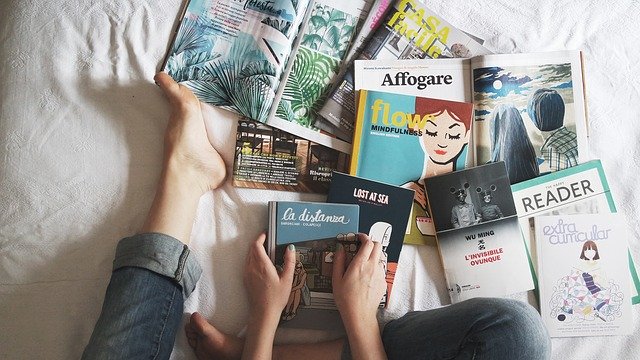 Summertime and the living is easy, as the song goes. After long working days and a stressful COVID19 crisis, lawyers are looking forward to unwinding and enjoying some well-deserved rest before school starts again. How best to relax than to grab a chair and a book? Or it could also be a magazine and short stories.

Packing a punch in less than 10,000 words and short enough to be read in one sitting, short stories make for a great summer reading experience. It’s fine if you don’t have hours to focus on the plot between breakfast and lunch and you can quickly get away in spirit to faraway lands and places. How do you find short stories?

A good place to start is your local bookstore. Short stories are often by the till, squeezed between snacks and fluffy notepads, the literary equivalent of sour candy by the cashier in supermarkets.

Having written nearly 400 short stories, Stephen King is certainly a king of the genre, with that thriller / horror twist that make you jump and look around before turning the page. His most famous short stories include Children of the Corn, Rita Hayworth and Shawshank Redemption, The Body (which became the movie Stand By Me) and The Mist.

Equally known for his novels and short stories, Haruki Murakami is a master of surrealistic and melancholic fiction. His recent collection of short stories Men Without Women features seven stories following the lives of whisky and jazz loving men who, in their own ways, find themselves alone. Expect bleak worlds, moods and atmospheres challenging readers to think deeper about topics that concern us all.

Crime queen Agatha Christie was also a prolific short story writer whose stories first appeared in journals, newspapers and magazines. Readers are spoiled for choice with short stories collections around Hercule Poirot or Miss Marple, or other classics such as The Harlequin Tea Set.

Another short story queen inspired Alfred Hitchcock with her craft. Daphne Du Maurier knew how to craft real people evolving in suspenseful, often supernatural plots. Her most famous short story is certainly The Birds but other pieces like The Doll, Kiss Me Again, Stranger or Monte Verita will satisfy any craving for imaginative, if unsettling, short fiction.

Every year, the BBC and Cambridge University sponsor the BBC national short story award (NSSA) whose five shortlisted stories are recorded, produced and broadcast by BBC Radio 4 as well as published as the BBC NSSA anthology. The winning story is usually published in its entirety in The Guardian and makes for excellent prose to read on the go. Recent winning stories include The Invisible by Joe Lloyd (2019),  The Sweet Sop by Ingrid Persaud (2018) and The Edge of the Shoal by Cynan Jones (2017).

Reflecting on reflects the contemporary development of the African story-telling tradition, the AKO Caine Prize is an annual literary award for the best original short story by an African writer, whether in Africa or elsewhere, but published in the English language. In 2020, Nigerian-British author Irenosen Okojie won for her short story about a Grace Jones impersonator with a dark secret.

At a time when the UK creative arts sector is hit so hard, readers can support publishers by buying independent magazines that reflect the wide variety of opinions and views that make our society so rich. Who knows, you might even discover your new favourite magazine.

The titles listed below can usually be bought from their websites. Shops that stock independent magazines include:

Here is our short selection of great magazines for curious minds, looking out to the world even if locked down somewhere.

This London-based magazine has covered British contemporary art since 1976 and is Britain’s longest-running contemporary art magazine. From interviews to exhibition reviews, Art Monthly helps art lovers keep their finger on the pulse. They can also listen to Art Monthly Talk Show, the magazine’s monthly podcast on Resonance FM.

A general-interest British magazine, Prospect brings to its readers ideas and trends behind the headlines and a contrarian view of topics. While other magazines deliver on general interest topics, Prospect is one of the few publications to feature mostly long essays, interspersed with quick reads, recurring columns and other type of reporting. Think of it as The New Yorker, London version. Adding to our list of short stories above, Prospect has also published the winning short story of the Royal Society of Literature’s V. S. Pritchett Memorial Prize since 2009.

Small indie publishers are facing difficulties and you can help them out by buying a book or ordering a magazine. How more intriguing does it get than a small Devon-based literary magazine publishing poetry, prose and articles on myth, nature, spirituality and the environment? The Dawntreader gives readers the “opportunity to let the imagination run free”. Surely, an invitation to travel in spirit is very welcome after recent stressful months.

Only a few months old, Cocoa Girl Magazine was born during lockdown when a mother searched for magazines that represented her six-year-old daughter Faith. Lack of diversity led them to embark on designing and printing the first ever UK magazine for young black girls aged seven to 14. True to its young demographic, Cocoa Girl only uses Instagram to communicate on social media with readers.

If you’ve been dreaming of a Scottish Highlands fix but still can’t get there, The Scots Magazine can probably help with that. Allegedly the oldest magazine in the world (first published in 1739), The Scots magazine is the world’s best-selling Scottish-interest publication, containing articles on culture, history, nature and more., and is targeted at Scots at home and abroad. If you’re on Netflix, you’ll understand why the magazine needs to have an Outlander dedicated page with all things Diana Gabaldon, Jamie and Clare.

From the same publisher as Trail, Country Walking covers a ‘softer’ range of walking than its mountain-heavy sister mag, with the emphasis more on cream teas than crampons. Coastal strolls and lowland rambles sit alongside hilly and mountainous walking at the more forgiving end of the spectrum. Regular themed walks are especially fun, as well as the December issue that makes you feel like it’s winter wonderland all across the UK (gorgeous snowy pictures too). Last but not least: every month, Country Walking publishes 27 walks all across the country, printed on handy cut-out-and-keep cards.